One branch of Traditional Chinese Medicine is exercise, like Tai Chi and Qi Gong. Exercise is thought of differently in China, especially historically, than we typically consider nowadays in our country.

Using Our Bodies Vs. Our Minds

We are designed to use both our bodies and minds to accomplish tasks. However our culture has become less and less dependent on actually using our bodies for survival. For most of human history, whether hunting, gathering, planting, or building, we depended much more on our bodies to do what needing to be done to live. Partly because of technological advancement, we’ve learned how to survive in different ways, becoming more dependent on our minds. Now that we’ve recently created engines, plumbing, refrigeration, and computers, just as a few examples, most of us don’t need to walk a distance to the river, come home carrying heavy buckets, or chase after our food. In Vermont, many of us heat with wood, hunt, or keep a garden, requiring physical effort at certain times of the year. And some of our jobs truly do require regular exertion. But the general trend in our country is imbalanced in the daily use of our minds compared to our bodies. So we are advised to go to the gym, walk, run, ski – exercise.

While I was living in China, I saw that walking or bicycling were the main forms of transport for the average person and their goods. Only the rich owned a car. Older people were riding bicycles. I truly don’t remember seeing a single wheelchair or walker. Exercise, the way we think of it, was characterized by slow types of movement and was performed in groups in the parks. This was typically Tai Chi or Qi Gong.

Exercise is the Movement of Energy

Chinese Medicine is based on the understanding that any living thing has an animating force, or energy, that allows it to grow and function the way it is designed. The brain, organs, muscles, blood, cells all need that energizing force to perform their jobs. In order for the heart to continue pumping the blood throughout your body, it needs the appropriate energy to do so. This energy is what acupuncturists and practitioners of Chinese Medicine have been paying attention to in order to keep the body healthy and deal with disease.

Exercise stimulates the movement of energy, or breath, or life force, called Qi in Chinese. It does not have to be vigorous to do so. You may think in Western terms; the use of muscles demands increased blood flow. By sitting in front of a computer, using mainly our minds to input data or solve problems, we are limiting the circulation of blood and Qi throughout our bodies and gradually compromising it’s inner workings. Hence you are advised to get up at least once an hour to move your body, demand blood to circulate to your stagnant muscles, in other words, move your energy. This could mean a quick walk around the office, climbing up and down the stairs, or doing jumping jacks in place.

Qi Gong is one form of exercise often advised for maintaining health. Qi Gong can be translated as “work” or “a cultivated skill”. This exercise is an ancient practice of gentle, rhythmic movements, breathing, postures, and intention focused on cultivating energy to keep the body working as it is designed to, especially into older age. There are many different types of Qi Gong that have developed over thousands of years. One form is called Soaring Crane Qi Gong; some parts look as if we are moving like a crane (a bird, that is, rather that a piece of machinery). It is known to reduce stress, build stamina, increase vitality, and enhance the immune system. It has also been found to improve cardiovascular, respiratory, circulatory, lymphatic and digestive functions. Western scientific research confirms that Qi Gong reduces hypertension and the incidence of falling in the aged population. 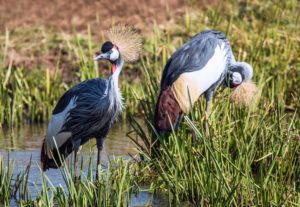 When in China for that year, I spent every Sunday morning traveling across town on a crowded bus to meet my Tai Chi teacher in a park. With broken Chinese and mostly imitation, I learned this form of exercise that many people practice daily, usually in outdoor groups. Tai Chi, which originated as a martial art, is sometimes referred to as “moving meditation.” Practitioners move their bodies slowly, gently, and with awareness, while breathing deeply. There are several styles with specific sets of movements, having a more martial feel than Qi Gong but producing similar benefits. When I am practicing these exercises regularly, I find my blood pressure normalizes and I have a higher energy level throughout the day.